Find the Best Apartments for you

In many ways, the history of The Avenue’s site mirrors that of downtown Huntsville.

When the boundaries of Huntsville were originally established in 1809, Holmes Avenue served as the northern edge of the town, leaving the tract of land where The Avenue sits just on the outskirts of the settlement. After Alabama entered the Union as a State in 1819, Huntsville grew rapidly and the town limits expanded to include this block and beyond.

As of 1860, the block consisted of wooden structures housing a combination of private residences and businesses. Mr. Hugh Easley operated Easley’s Hotel as well as an undertaking business and a cabinet shop, while his wife ran a millinery store. A shoe shop and a blacksmith’s shop served the needs of Huntsville residents. By the 1890s, several grocery stores, a general merchandise store, restaurants, and a boarding house also occupied the block. Huntsville’s iconic Harrison Brothers Hardware operated on this block before moving to its current location on South Side Square in 1897.

By 1910 most of the original wooden structures were replaced with brick buildings. The business that operated on the block continued to reflect the needs of the times and included T.A. Thurston Grocery, Curry Fackler Billiards, J.H. Jones Grocery, Lilly Bakery, Krantz Dentist, and Metropolitan Insurance. A boarding house, livery, tailor, and parsonage for Lakeside M.E. Church rounded out the block. 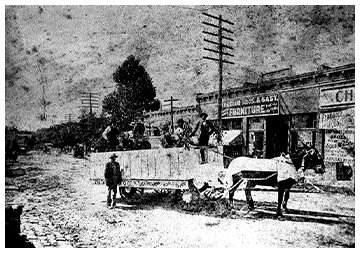 By the 1970s, suburban developments were springing up across Huntsville, and enclosed shopping malls were very fashionable. Many businesses had migrated from the downtown commercial district to the malls resulting in shrinkage of the commercial district and many vacancies on this block. Initially, some buildings were converted to apartments but within a few years all of the buildings were vacated and the block was demolished.

Today the block comes full circle. The construction of The Avenue has returned this area to its original incarnation complete with both residential and commercial space. With 197 spacious lofts and 21,000 square feet of street level restaurant and retail space, the living experience is unlike anything else in Huntsville. We look forward to welcoming you home!